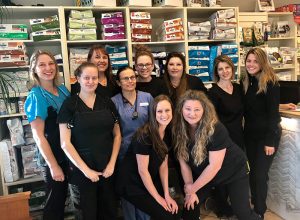 Gillian Wiley, DVM:
Dr. Wiley was born in Ireland and completed her Bachelor of Science in Zoology in Dublin. She moved to Canada in 1987 to pursue a Master’s Degree in Edmonton for 2 years and never left! She followed her life’s dream and attended veterinary school in Saskatoon, and started life as a Vet. After working in a number of towns and clinics she became the owner of Duncan Animal Hospital in 2009. She lives happily in Cobble Hill with her four children, and their evolving menagerie of pets.

Alisha:
Alisha joined our team at Duncan Animal Hospital, in September 2013. She is originally from the lower mainland, but now calls Chemainus home. Alisha is an animal lover and has a dog, cat and 2 ducks. In her spare time she enjoys spending time with her family and pets, or curling up with a good book.

Jodie:
Jodie is a biologist who has joined the Duncan Animal Hospital team. Originally from the U.S., she now lives in Duncan with her family of 4 and dog “Ducati”. She is truly enjoying a second grasp at a professional career.

Keira:
Keira is our newest Veterinary Assistant. She graduated from Insignia College in March of 2018. Originally from Ontario, Keira is now living in Shawnigan Lake with her boyfriend and their fur baby “Oscar”. In her free time she enjoys playing hockey, dirt biking and either snowboarding or wake surfing (depending on the time of year) She is currently upgrading her courses and will be taking the RVT program within the next year!

Andrea:
Andrea was born and raised in Costa Rica and then moved to the lower mainland. She attended the University of Victoria where she majored in Sociology with a concentration in social justice and social change. She is now enjoying the lake life in Lake Cowichan! She is very happy to have the opportunity to work closely with animals and learn new things every day.

Ali:
Ali has recently moved from New West with her husband into the beautiful Cowichan Valley. She attended University of Victoria, where she majored in Geography, and minored in Environmental Studies. In her free time she enjoys going fishing, camping and playing with her foster kittens.

Jessica:
Jessica graduated as a RVT from the Northern Alberta Institute of Technology in 2007. She moved from Edmonton to the Island with her family in May 2013. When she is not running after her daughters, Jessica spends her time hiking with her dogs “Theodore” and “Missy”. At night you can find her cuddled up with her cat “Ninja Boo” and “Bonsai”

Meagan:
Meagan was born and raised on Vancouver Island. She graduated as an RVT from Thompson Rivers University in 2012. She has experience in oncology, lab work and emergency medicine from her past employment at an emergency and specialist referral clinic. She is happy to announce that her family is growing by one more! Meagan and her husband are waiting on the arrival of their baby boy that is due in February 2019!